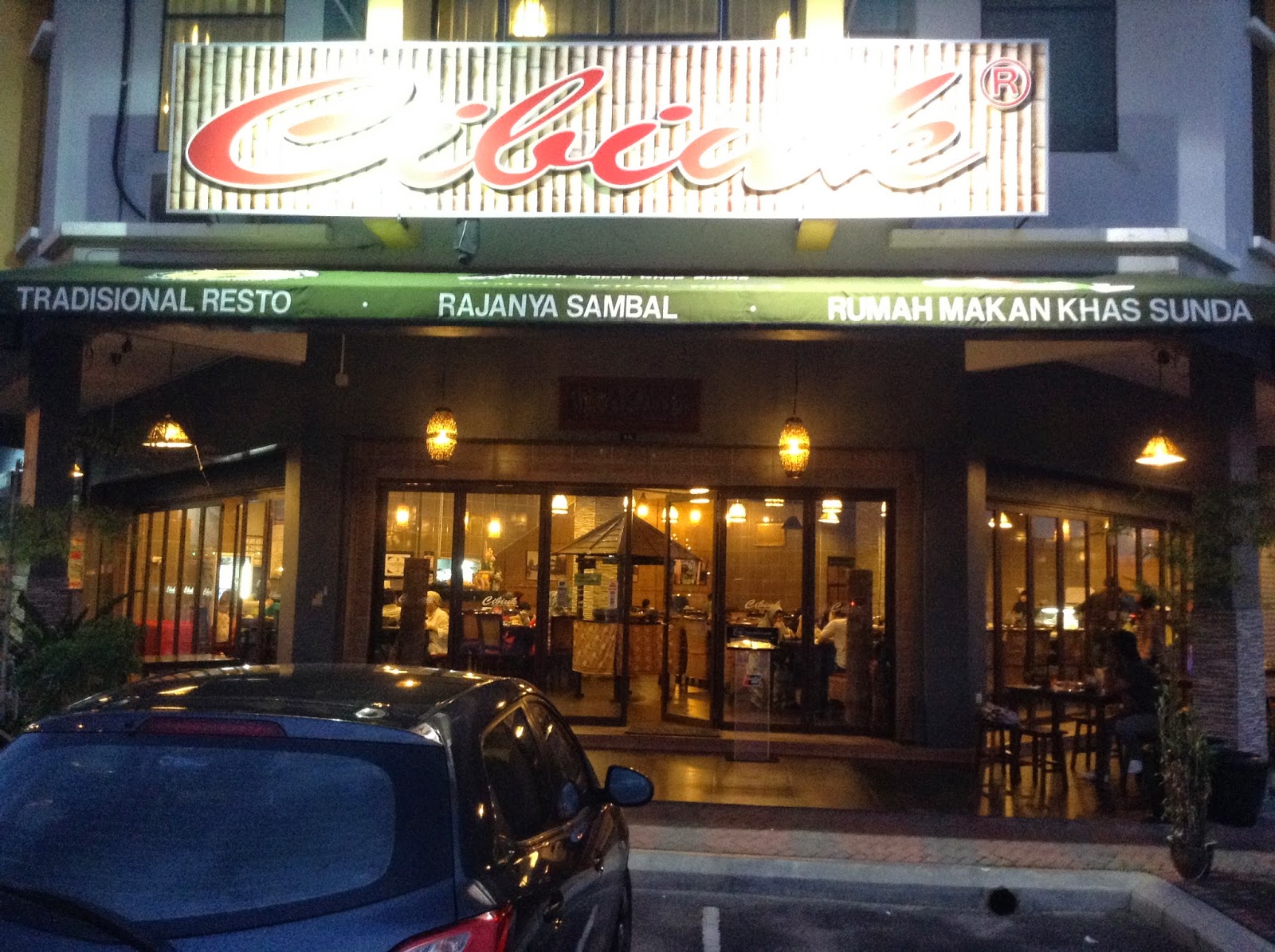 Cibiuk is a popular Sundanese restaurant in Taman Putra Kajang. The restaurant is pretty easy to find since it's facing the Kajang highway and we found parking to be a breeze (do note we came during an off peak hour though). It's spacious, clean and modern with some Indonesian decor (I like how the ulam bar looks) and yay, they have baby chairs. 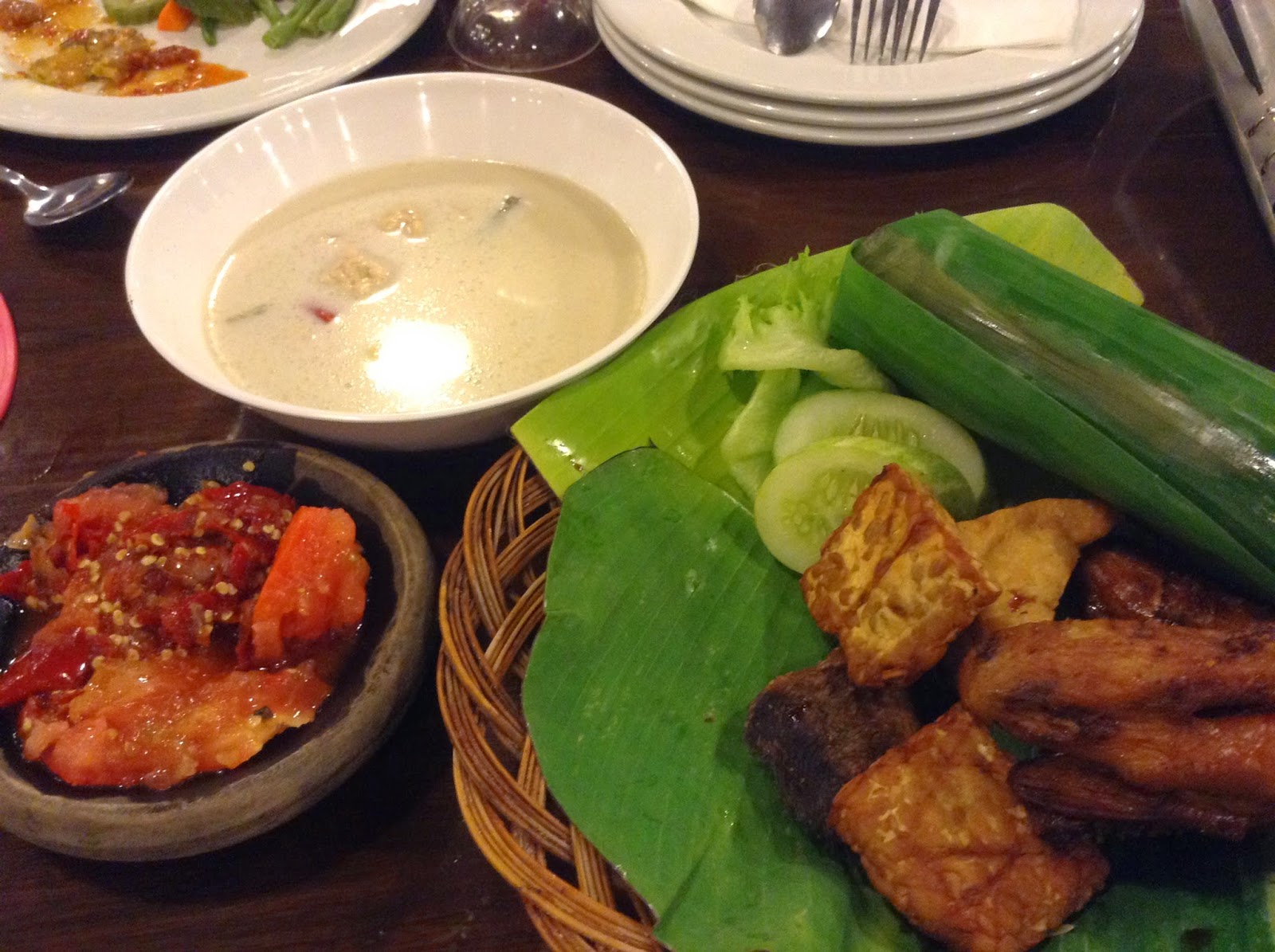 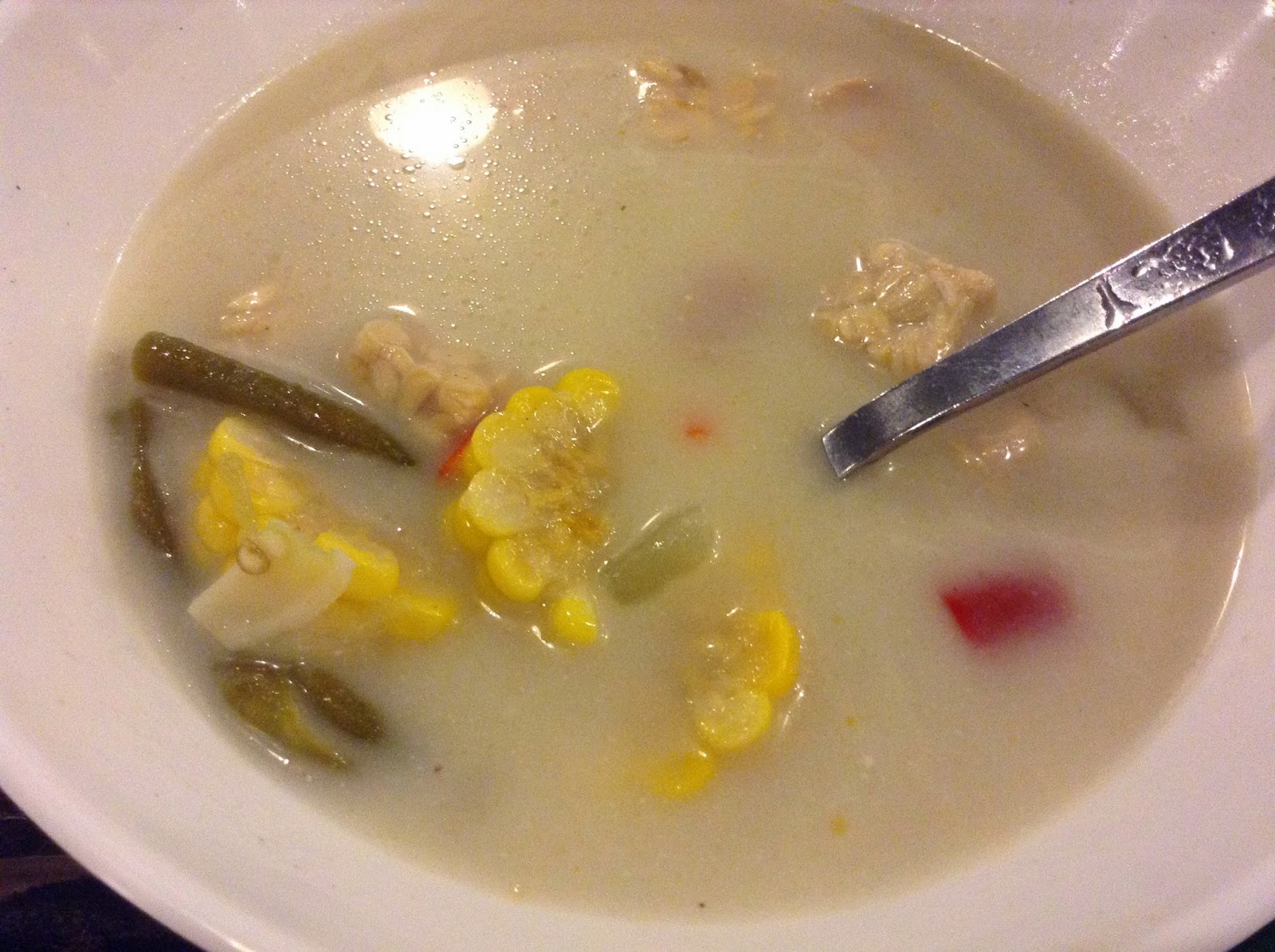 K: I had Nasi Timbel Komplit Ayam Goreng: RM13.90. What is nasi timbel? Rice wrapped tightly in banana leaf so that it remains fluffy and of course, the aroma of the banana leaf would seep into the rice. Included with the rice is fried chicken, fried tempeh & taufu, sayur lodeh, ulam & sambal Cibiuk.

I like my sayur lodeh creamier and thicker. Sue me, I'm not health conscious! The kuah here is quite watery but I've seen the same dish at other Indonesian restaurants and it seems to be the way they prepare it. The corn was not very sweet, no surprise, as all the sweetness have probably been drained into the gravy. 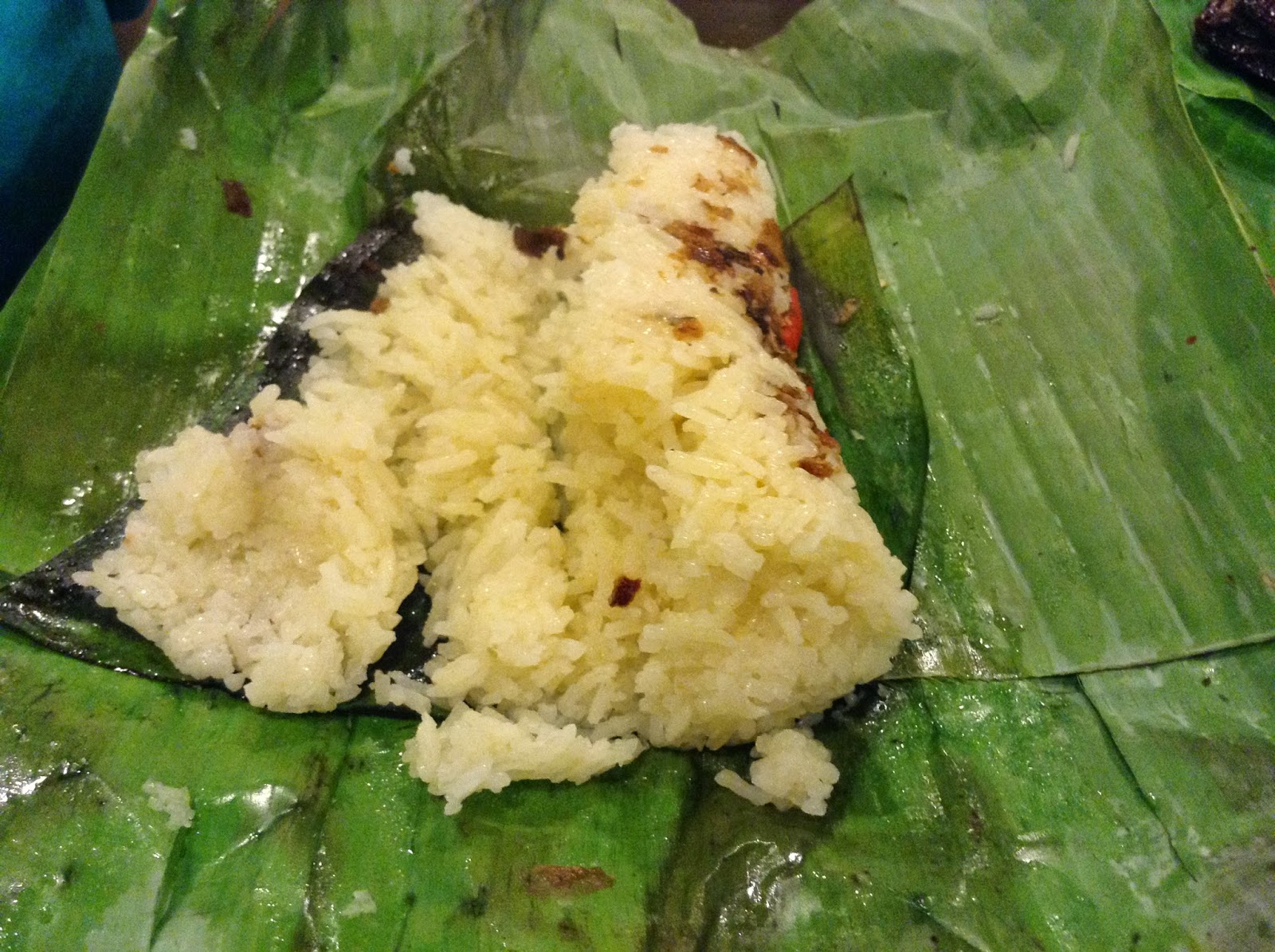 The rice was exquisite! I had ordered the ayam bakar instead, which for me was on the sweet side and sadly, rather small too. It was tasty and tender but the portion I got was dissatisfying for a hungry tummy. 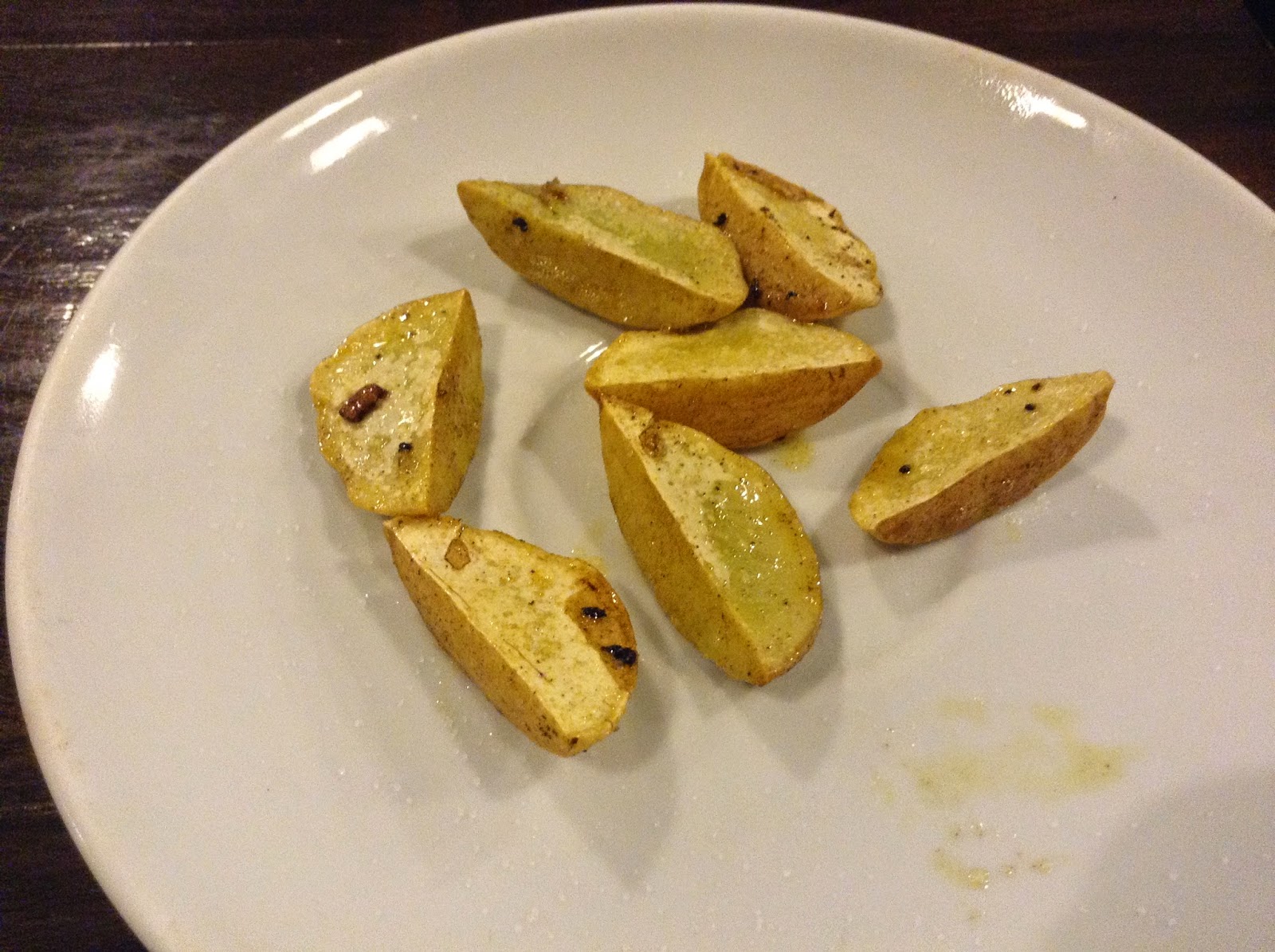 Our dishes came with jering goreng. Fuh. I've never had jering fried before and I must say...I LIKE IT. It brought out a nuttier taste and and mellowed the usually uber-strong flavour of jering.

K: I'm not a big fan of raw petai. The taste is too strong for my liking. I only like cooked petai. By the same token, I've never bought jering because it's supposed to be stronger than petai and I didn't know how to cook it. But now that I know jering can be deep fried, well, jering here I come!

My nasi was supposed to come with pegedil jagung but it was missing from the plate. When asked, they gave me a blank look (it's supposed to come with what?) and then (after checking with the kitchen) said it was finished. And that was it. Waduh. We asked them to give us extra tempeh to compensate, which they did with no extra cost of course.

K: The sticking point is that we had to ASK them about the lack of the pegedil. They should have informed us earlier if a key ingredient was unavailable, then we can order something else. Also, there was no effort to make up for the missing pegedil. It's like, "No pegedil? Sucks for you. We are still charging you the full price." We had to ASK them for the extra tempeh. 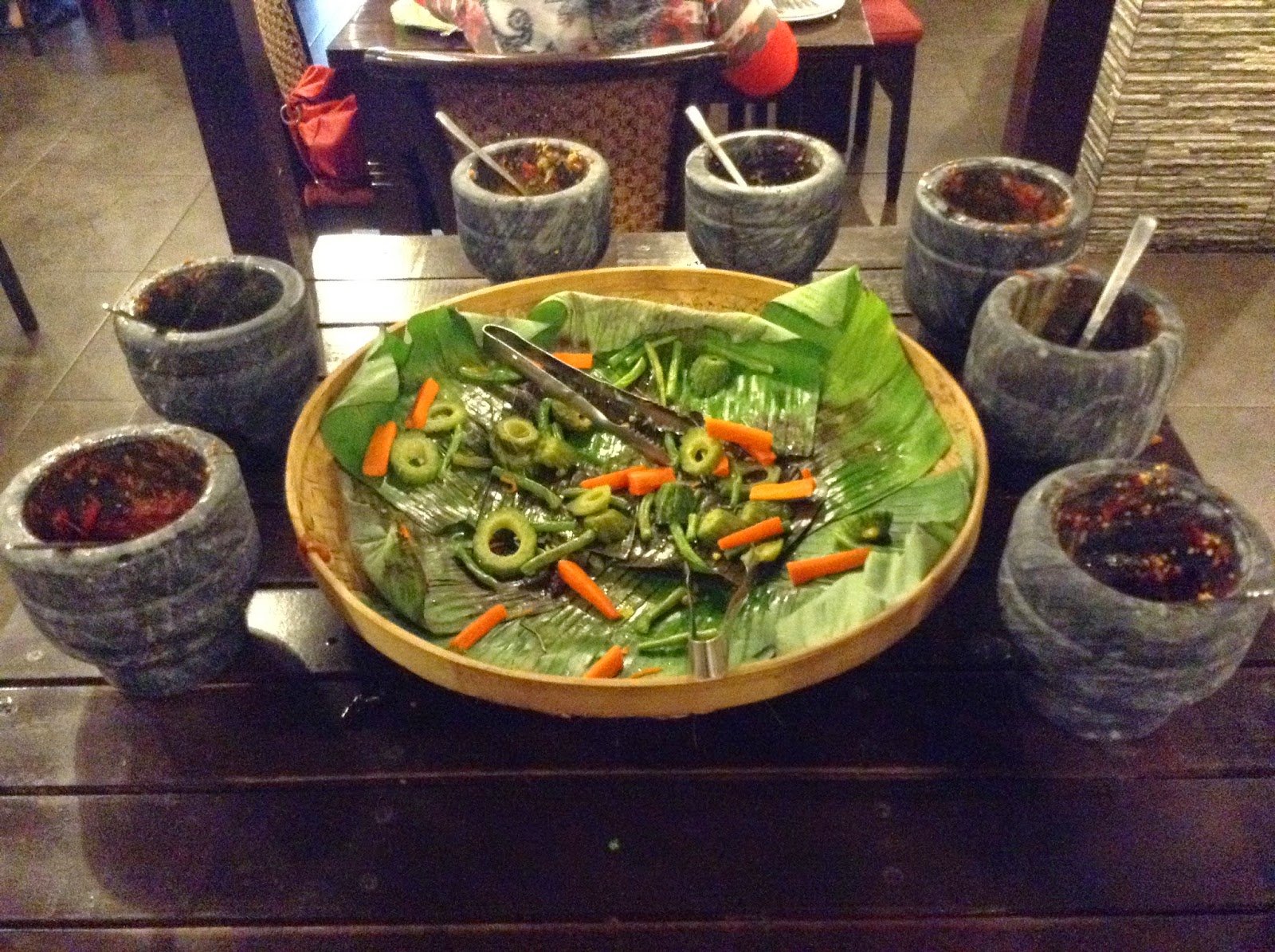 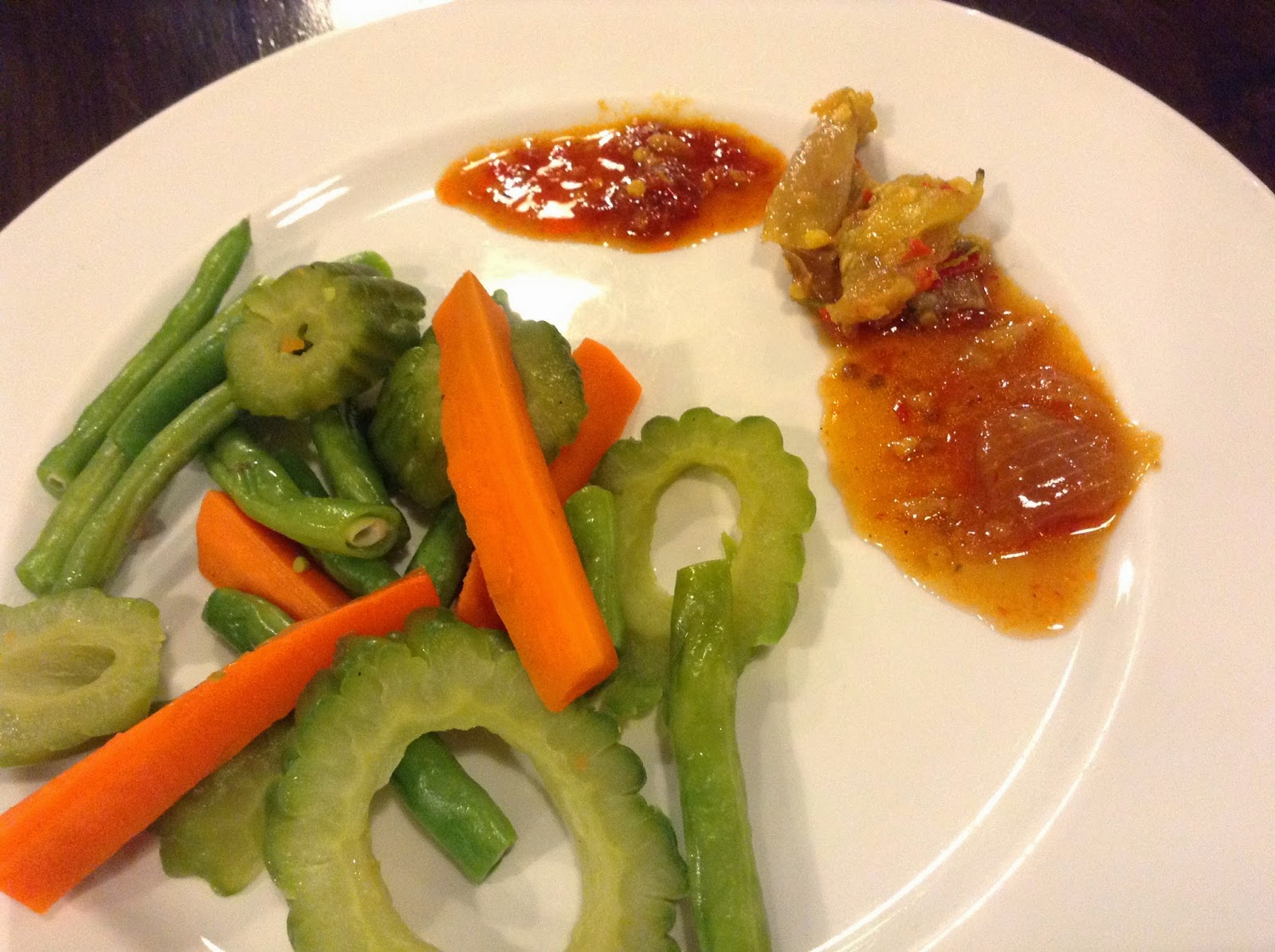 There's an ulam bar with a wide variety of sambal. Wah, sambal ada berjenis?? Sadly, the ulam bar was not replenished (veggies or sambals) throughout our visit. We only managed to sample a teensy weensy bit of 3 types sambals and don't know what they were because nothing was labelled.

This was a rather unfortunate problem throughout the restaurant to be honest. Take the menu for example, there's very little description for the dishes (just what's in it). If you, like us, are unfamiliar with Sundanese food, you'd be scratching your head wondering "what's a nasi timbel? how is it different from nasi komplit?". Ask the waiters and they'll be "uhhhh...."

K: For an establishment with the tagline, "Rajanya sambal" or "The king is sambal", the variety of sambal was visibly lacking. At the ulam bar there were  7 containers of sambal but only 3 had any content & even then we had to scrape the bottom of the container because they were almost finished. Come on lah, it's not as if we came at closing time. Don't tell me with 4 hours of operation left, you just can't be bothered to replenish the sambal & the ulam?

Service was also a little slow. K had devoured his rice in record time and asked for seconds...which did not come. He had to order it again with another waiter, and it appeared soon enough after. However, we were double charged with the rice refill cos they added the forgotten order in the bill, just not the kitchen. D'OH.

I've been told that the poor service we experienced (minus the unreplenished ulam bar) that day is an anomaly. Maybe it's because we went on a public holiday, and they gave their staff an off day cos they looked short handed. However, I have to state that though it was a public holiday, we came for an early dinner, and the restaurant was not full house when we arrived or left. 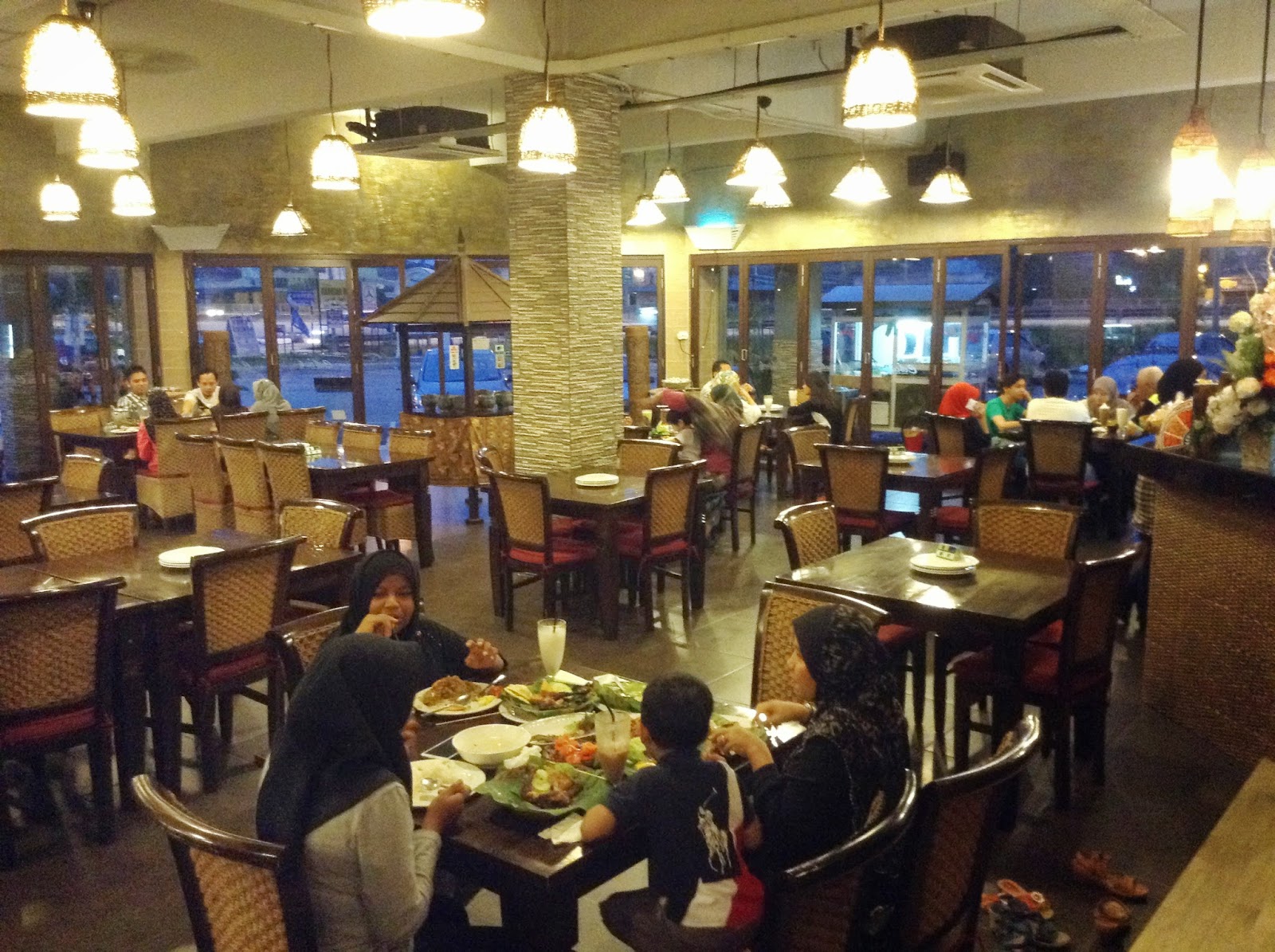 If you're coming in a large group, do call ahead and book a table as this restaurant is popular. They even advise you to order ahead to avoid disappointment.

Verdict - Top notch food with third rate service. I would come again, but not in a heartbeat.

TJ: "Susah nak cari makan spotslah. There's not enough good food blogs for no-pork eaters."
Nina: "Then start your own blog lah."
TJ: "Malas. Unless you do with me."
^_^
(Nina's currently doing her Masters overseas, so KK is adding his input instead)

The places Halalish Noms reviews does not necessarily have official halal certification. Please eat at your own risk.